12 of the World’s Most Impressive Office Buildings

12 of the World’s Most Impressive Office Buildings

With their iconic designs, cutting edge building techniques and the use of technology and multimedia, many modern office blocks push the limits of materials and space.

Here we showcase some of the most awe-inspiring office buildings in the world. 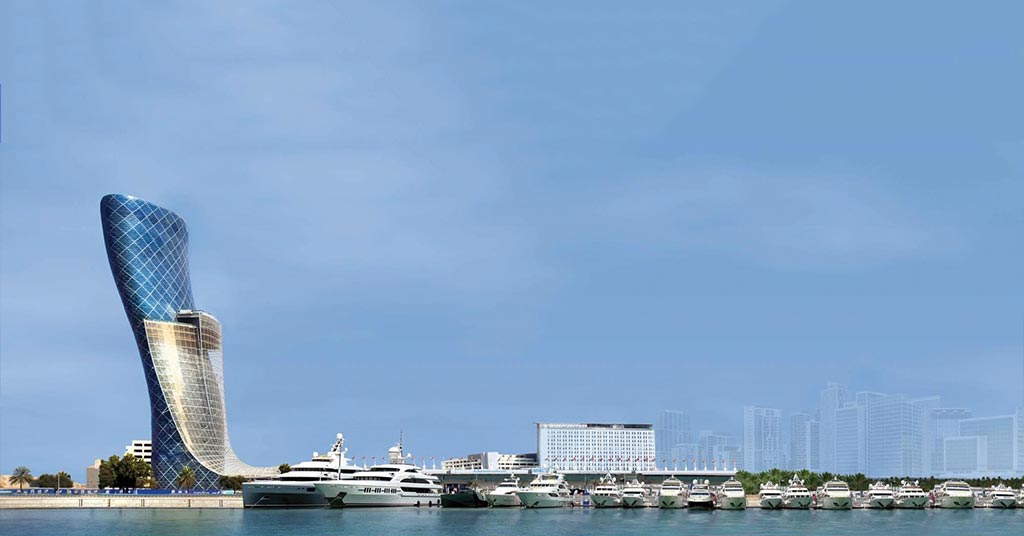 Capital Gate is intentionally built to lean 18 degrees to the west. It uses what’s known as a pre-cambered core as a counter balance. Floor plates are staggered to deliver the signature aerial lean. To support its 35 storeys, which reach a height of 160 metres, Capital Gate is underpinned by foundations that are drilled up to 30 metres underground. 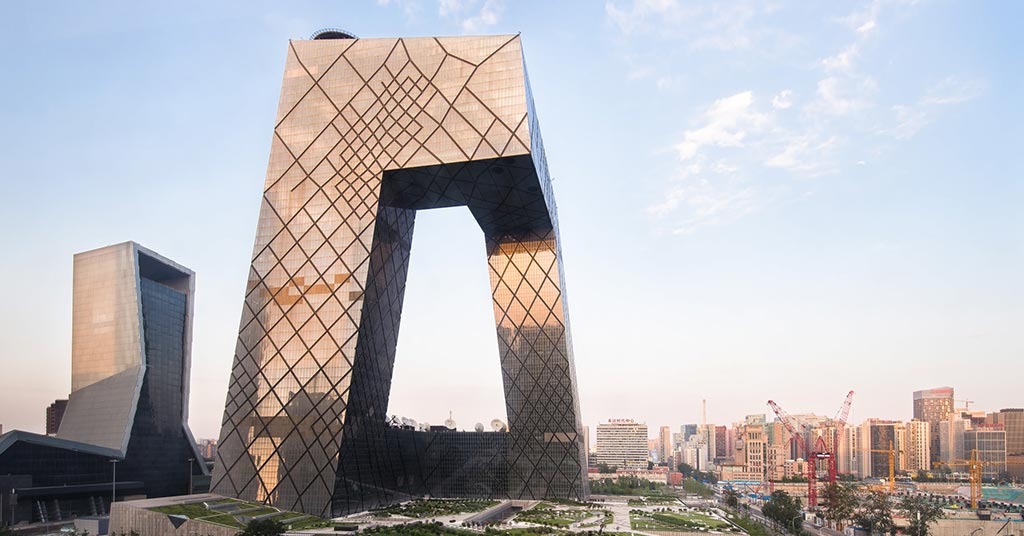 The 237-metre CCTV Headquarters in Beijing consists of two towers that lean inwards at six degree angles. They are joined by a base building and a perpendicular 75-metre cantilever.

The construction is designed to withstand wind, seismic activity, and thermal expansion and contraction. The design is based on the concept of a skyscraper as a loop, and its construction is visible in a web of diagonals on the facade. 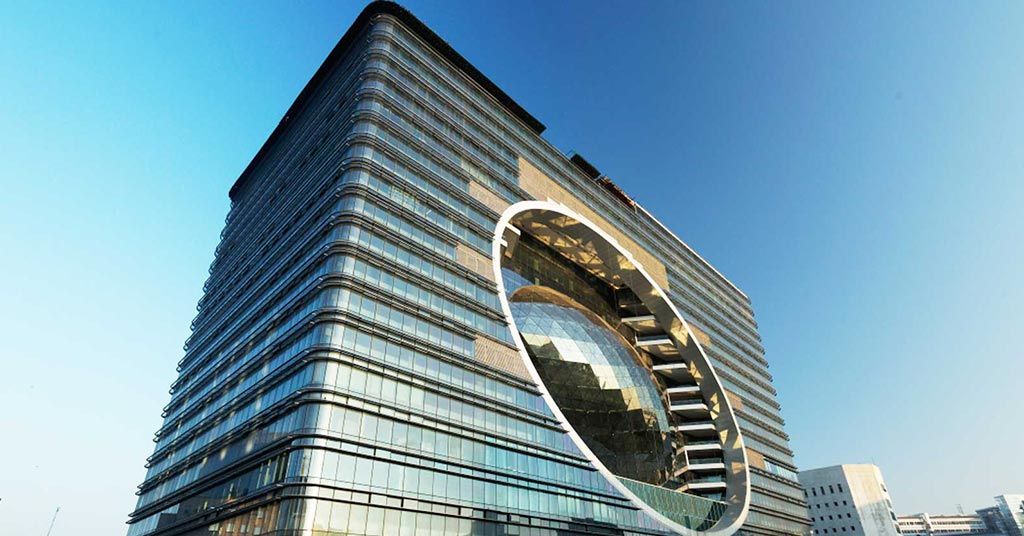 Dominated by a large oval shape in its centre, The Capital is an example of “Cybertecture”, a new school of architectural design. It combines artistic expression and functionality with sustainable construction.

The orb has a gigantic, built-in LED media communications screen, which projects company news. The building’s skin is made of high isolation transparent glass, and intelligent environmental technologies are integrated into the material. 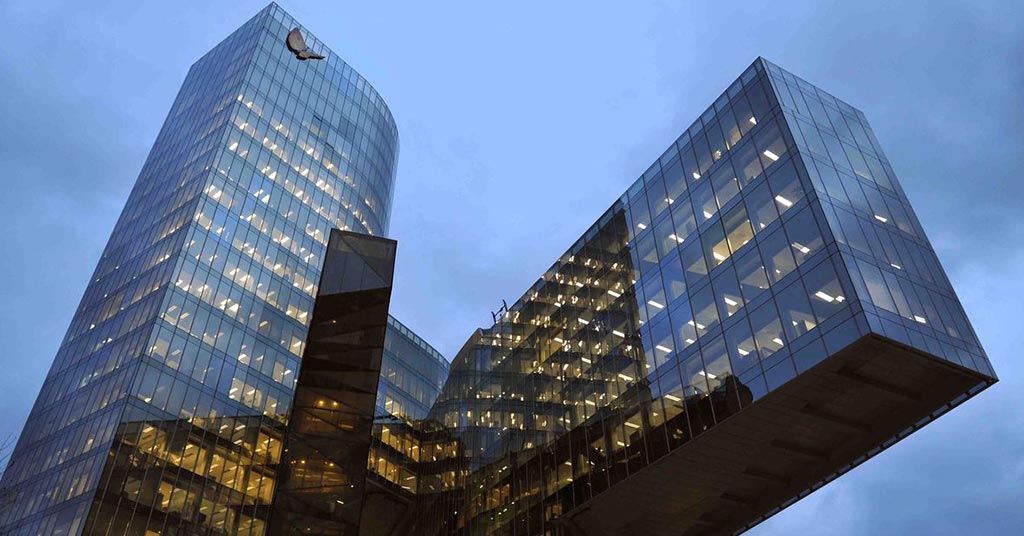 The headquarters of Gas Natural consist of a 20-storey glass tower, along with a series of fragmented buildings of different scale clad in a matching skin. The construction features a perpendicular reflective glass overhang. The buildings are merged to form a series of layers, and the entire facade is finished in silver and colourless solar glass panels. 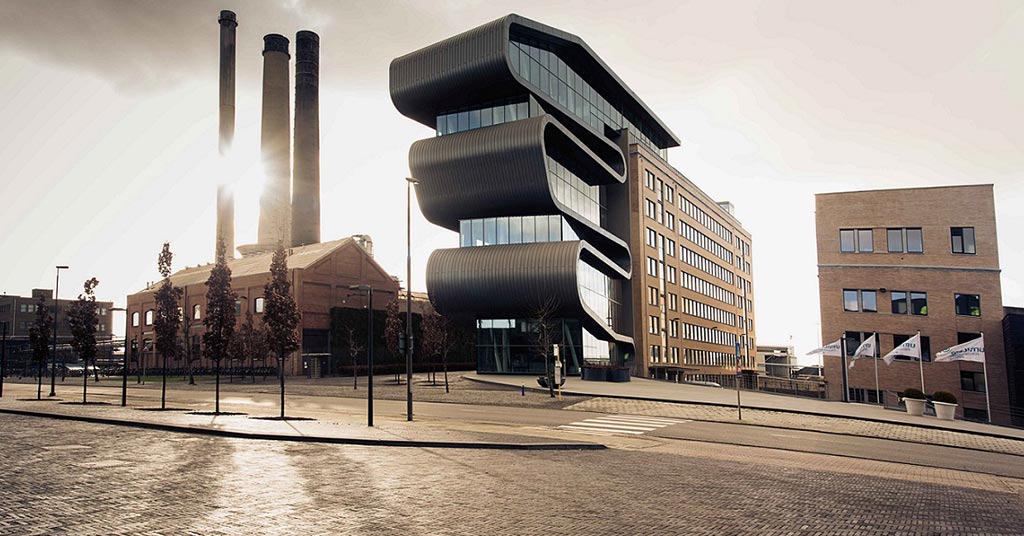 The office building of the Belgian metal refiner visibly reflects its trade. The street profile has been narrowed and shaped using a massive zinc-plated ribbon to create a sheltered ground floor lobby. The facade between the curved strips of metal is glazed to deliver optimal heat and light. 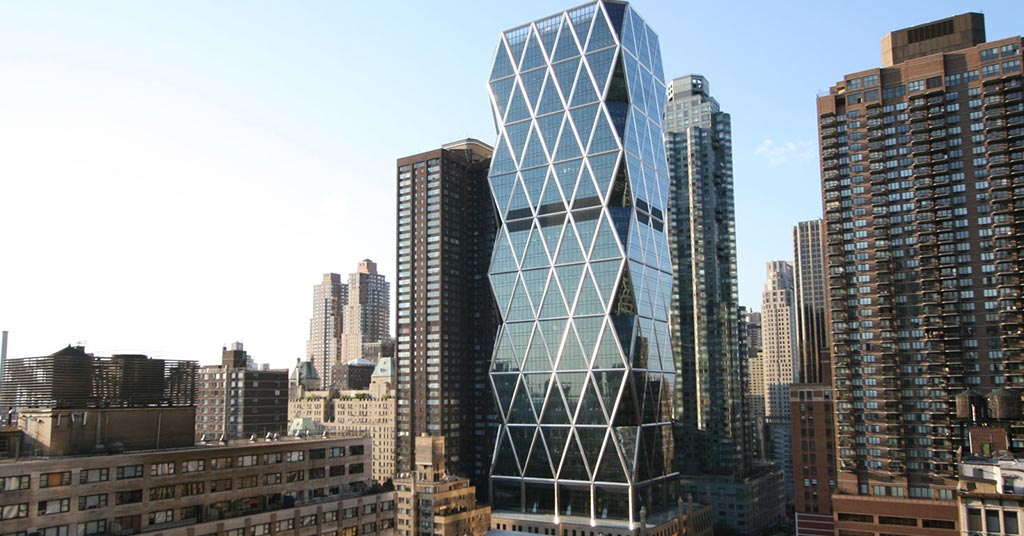 The 46-storey Hearst Tower is linked on the outside by a layer of glazing to create the impression that the building is floating in the air. It is built in a triangular diagrid pattern. Its cut-back corners on the diagonals create a one-of-a-kind silhouette on the New York skyline. 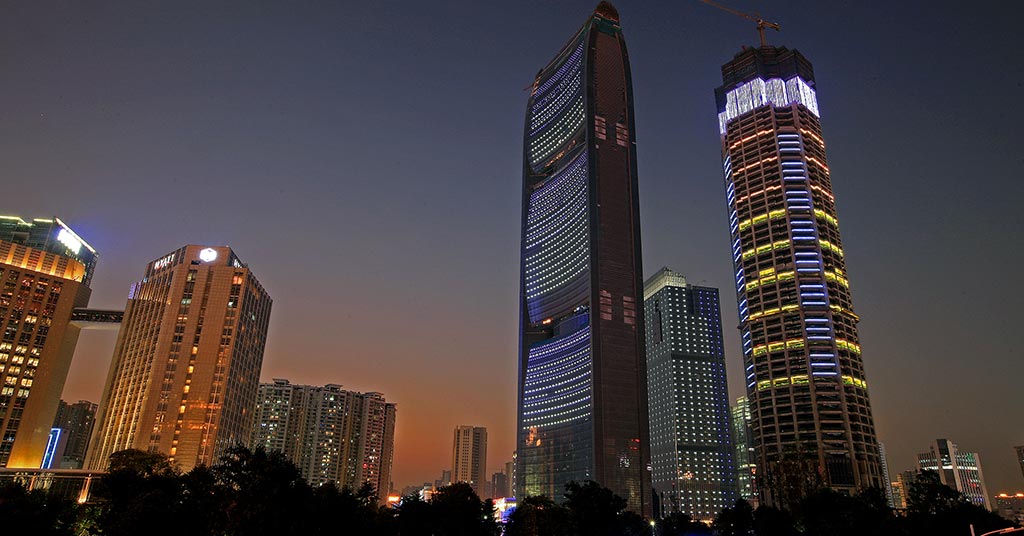 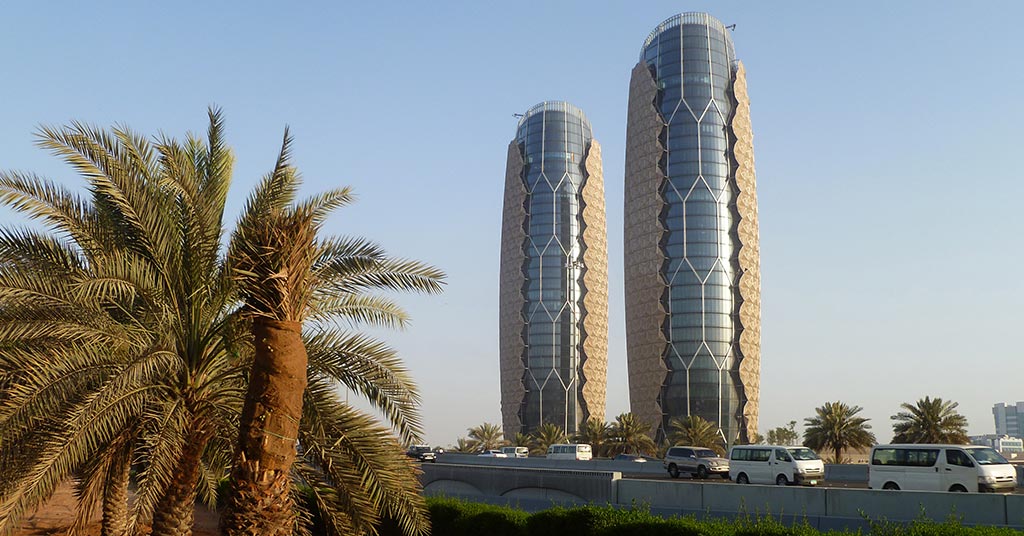 The 145-metre Al Bahar Towers are partially clad in a responsive facade that’s programmed to react to the sun. It’s constructed as a separate screen, and comprises individual panels that change angles so as to reduce the effect of solar glare. At night, the panels fold away, revealing the more conventional glazed surface of the HQ of the Al Hilal Bank. 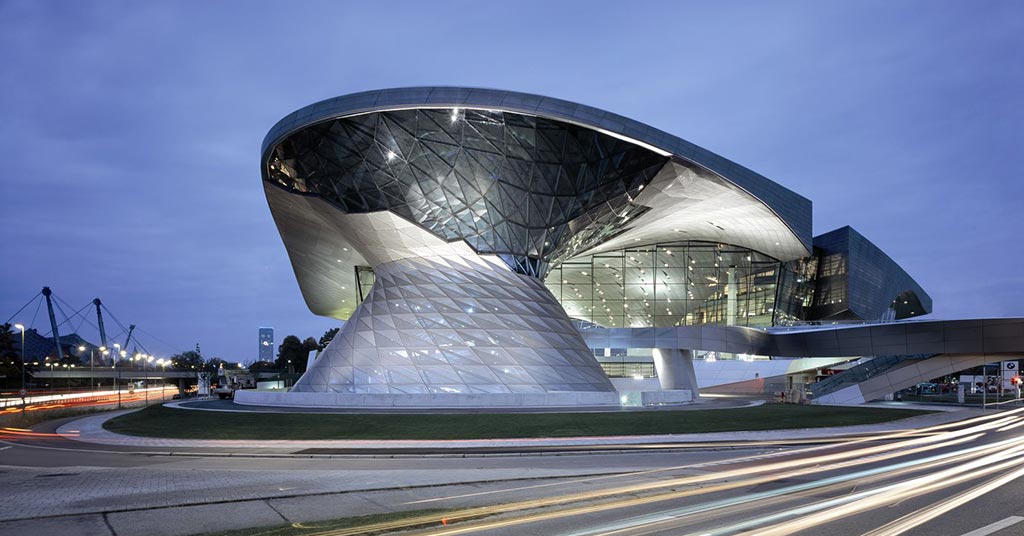 BMW’s futuristic multi-use exhibition centre is defined by a double cone and a roof that takes the form of a floating cloud. The entire facade is clad in transparent glass. Over 4 000 tons of steel was used in construction of this architectural wonder. 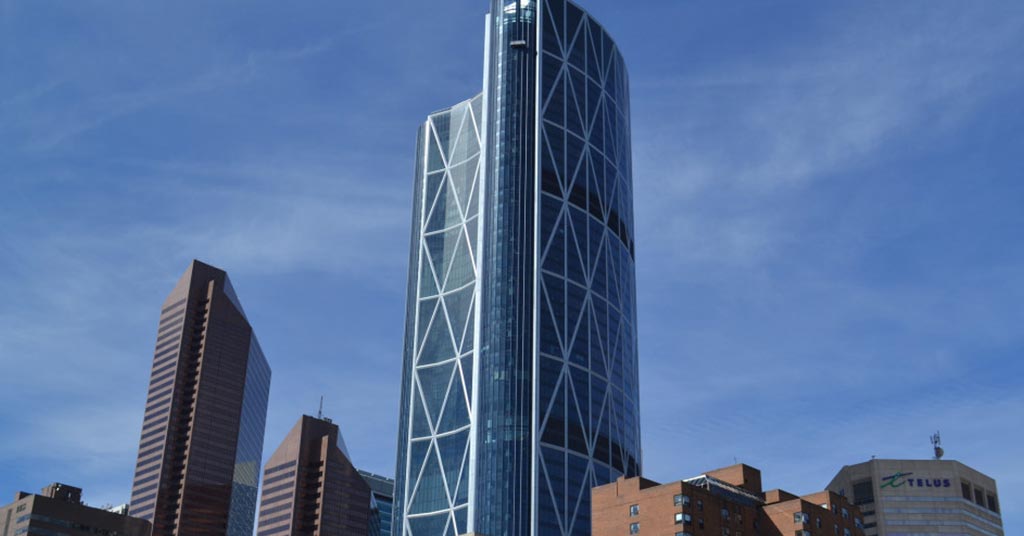 The Bow towers 236 metres into the Calgary skyline, and is built to deflect prevailing winds. It features six-storey high sky gardens. Solar heat is captured and re-distributed, and large areas of glazing provide natural light. 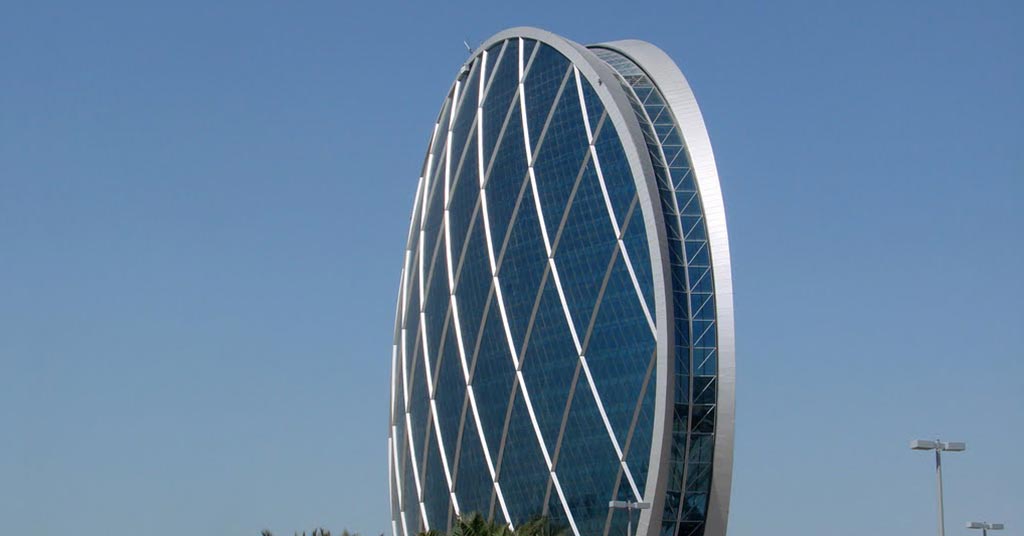 With a futuristic spherical design consisting of two fully glazed circular facades, the award-winning Aldar Building is one of world’s most iconic structures. It’s constructed from recyclable materials, maximises natural light and has an automated subterranean vacuum waste collection system that compacts and recycles all the waste products generated in the building. 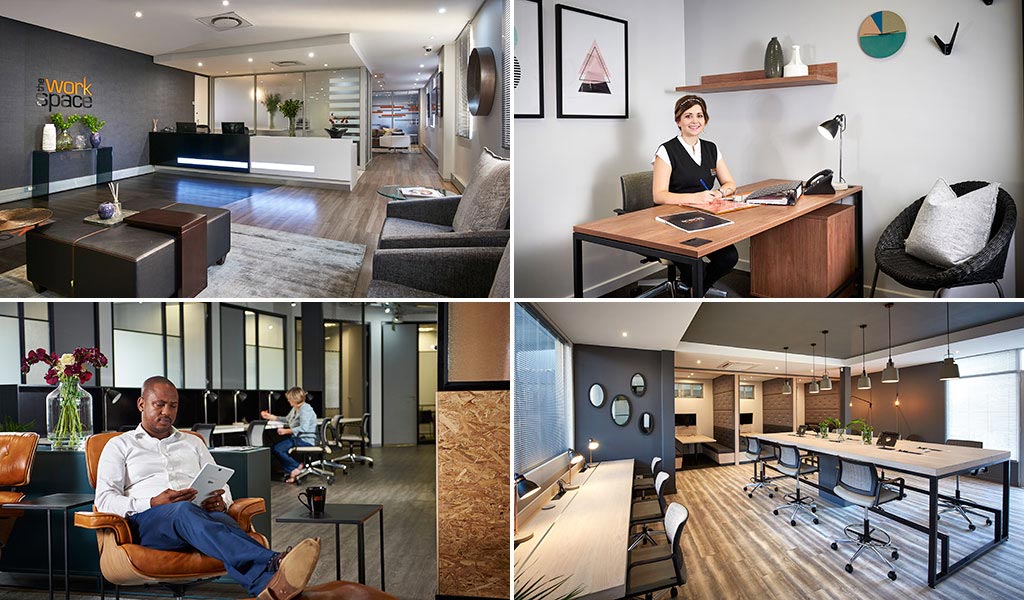 At The Workspace, our focus isn’t on futuristic architecture – but we are in the business of providing smart, modern solutions for today’s entrepreneurs and office workers.

At our branches nationwide, we provide affordable, fully serviced offices and coworking, with business infrastructure – such as high-speed internet, meeting rooms and video conferencing facilities – already in place. Our branches also offer a range of on-site business services.

Find out more about our serviced offices and coworking spaces

Moving to Ballito?: Useful Resources for Living and Working in Ballito

The Workspace and Muddy Princess

Any cookies that may not be particularly necessary for the website to function and is used specifically to collect user personal data via analytics, ads, other embedded contents are termed as non-necessary cookies. It is mandatory to procure user consent prior to running these cookies on your website.