A decade ago, everyone was talking about the possibilities of the internet – how it meant that employees could work from anywhere, at any time.

The idea of working from a pool-side deck chair was appealing. In practice, though, traditional office work of the “sit all day in your own cubicle” variety remained the reality for most of us.

It’s only in the past few years that we’ve started seeing more widespread changes in the ways people work, and these changes are revolutionising the role of office space.

The term “office worker” is rapidly losing meaning. That’s because physical offices no longer define the boundaries of our work environments. Instead, it’s company networks, the internet and e-mail that do this.

One result is that increasing numbers of people are working offsite, as contractors or freelance workers. More and more “full-time” employees are also working off company premises, at least some of the time. For example, it’s common to work offsite for certain days of the week or when an urgent deadline is approaching.

Another result is that less space is needed for workstations and files. Companies increasingly store their data on the cloud, and portable laptops are gradually replacing bulky PCs.

This doesn’t mean that physical offices are no longer needed. Instead their primary function is changing. Increasingly, it’s the shared space they provide that’s important. Also, they need to make it easy for people to arrive, “plug in” and communicate with others, quickly and efficiently.

The role of modern office space

Modern offices serve as spaces where employees can communicate with supervisors and each other, and align their efforts. It’s also where they can pool ideas and experiences, and access shared resources.

In addition, offices remain important as venues for meeting and impressing clients, job candidates and other visitors.

Behind the scenes, even high-powered executives may be doing some of their work in their pyjamas, but it’s still in formal offices and meeting rooms that many deals are signed.

In keeping with changes in the ways we work, the trend in modern office spaces is to include not just formal boardrooms, but also a number of casual “pause” areas and comfortable, open meeting spaces. These encourage face-to-face meetings, informal collaboration and creativity.

There’s also greater demand for meeting spaces that incorporate multimedia and communication technologies, like video conferencing facilities. This enables meetings between on-site employees and team members in other locations, whether they’re at home across town or in offices on the other side of the globe.

How The Workspace is leading the way 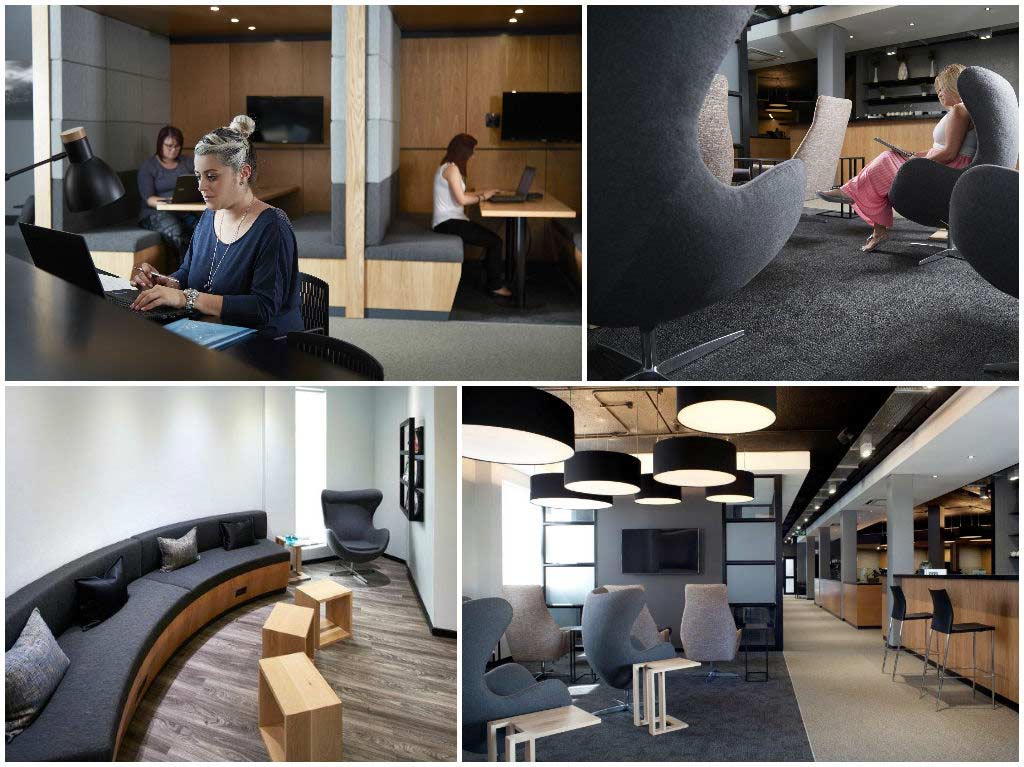 The Workspace is the ideal, cost-effective solution for modern entrepreneurs and contract workers. They provide private work space in sought-after business areas, along with business infrastructure that’s already set up, a range of business services and shared meeting rooms and boardrooms.

All branches also offer innovative coworking spaces. These combine comfortable areas for interacting with others, private booths with laptop connections and flat-screen TVs, high-speed internet, more formal meeting rooms, boardrooms with state-of-the-art video conferencing facilities and on-site cafés. Instead of signing a lease, just pay as you go to access the facilities each month.

Contact us for more information or a tour of our facilities.

Find out more about our coworking spaces

Centurion Office Space and Coworking: a Look Around our Branch

Reviews of The Workspace: What Some of Our Customers Say

Coworking in Randburg: An Ideal Option if You’re Self-Employed

This website uses cookies to improve your experience while you navigate through the website. Out of these cookies, the cookies that are categorized as necessary are stored on your browser as they are essential for the working of basic functionalities of the website. We also use third-party cookies that help us analyze and understand how you use this website. These cookies will be stored in your browser only with your consent. You also have the option to opt-out of these cookies. But opting out of some of these cookies may have an effect on your browsing experience.
Necessary Always Enabled
Necessary cookies are absolutely essential for the website to function properly. This category only includes cookies that ensures basic functionalities and security features of the website. These cookies do not store any personal information.
Non-necessary
Any cookies that may not be particularly necessary for the website to function and is used specifically to collect user personal data via analytics, ads, other embedded contents are termed as non-necessary cookies. It is mandatory to procure user consent prior to running these cookies on your website.
SAVE & ACCEPT